Are you looking for football drills to increase your speed and agility this off-season?

It’s natural you’re going to hit a time when you struggle to drop your combine numbers.

In this article, from the coaches at Gridiron, you’re going to find 7 football drills to increase your speed and agility to help elevate your play on the field.

The “T Drill” is one of the top football drills to increase speed and agility. This football drill requires 4 cones, with a series of complete changes of direction.

Click the link below to watch a video demonstration of the agility drill “T-Drill”.

In football, the ability to transition in and out of a lateral shuffle is very important.  The “Run Shuffle Run” football drill works great on reaction and quick change of speed by getting out of the run shuffle run position quickly.

Click the link below to watch a video demonstration of the agility drill: “Run Shuffle Run Drill”.

Click the link below to watch a video demonstration of the foot speed drill: “Single Leg Speed Line Jumps”

This speed training drill is great for unlocking your maximum speed and then maintaining it.

Place a cone at the start, 20 yard, 40 yard, and 60 yard mark. Sprint hard to the first cone and maintain speed until you hit the 40 yard cone, then slowly decelerate for the next 20 yards coming to a complete stop.

When done correctly, the “Flying 40s” is a great football drill to increase max speed and maintaining it.

Click the link below to watch a video demonstration of the speed drill: “Flying 40s”

Perform mountain climbers into 10 to 20-yard sprints to increase acceleration.

Performing “Mountain Climbers to Sprint” with Resistance Bands will help you develop power in the lower body!

Click the link below to watch a video demonstration of the speed drill: “Mountain Climber to Sprint”

This is an advanced speed training drill and is great for building strength and speed in your lower body.

Perform by jumping off one leg. You want to jump as far as you can off that single leg.

When you land, land on your same foot and drive off that leg as quick and explosive as possible.

The less time you can spend on the ground and the more power you can create, the better the speed training drill is going to be for maximum results.

Click the link below to watch a video demonstration of the speed drill: “Single Leg Bounding”

In football, the ability to transition in and out of your break is very important. The cone shuffle sprint drill will help teach your body to constantly keep your feet moving and accelerate quickly out of your break.

As you approach the last cone, keep your feet moving, and explode out into a 10-yard sprint.

This speed nad agility drill is great for developing acceleration, change of direction, and forward and backward movements.

Click the link below to watch a video demonstration of the speed and agility drill: “Cone Shuffle Sprint Drill”.”

Agility is the ability to change the direction of the body, but with the mix of speed, strength, coordination, and balance. Adding football drills to increase speed and agility is crucial for all football players in the offseason.

An athlete that has great agility is one with the ability to change their body’s position precisely. Along with the combination of isolated movement skills adopting a combination of speed, balance, coordination, strength, reflexes, and endurance. Agility is a skill that requires the body to change direction in a precise and direct manner. Adding speed and agility drills to your training will increase your pro agility shuttle time.

Why Are Agility Drills Important For Football?

Football players need to be able to have the ability to change direction fast to take advantage of the game. Let’s say if a football player is covering a wide receiver man-to-man downfield, or being within the open field with a running back, it’s essential to maintain your balance so you can make a play for your team.

Football is played at great speed and agility, so you need to train speed and agility to adapt to the game. At those speeds, twists and turns throw you off balance, but agility helps you to regain balance and make it seem like you never lost it. The more football drills to increase speed and agility, the more prepared you will be come game day.

Have You Seen Our Training?

Get Started For Free

Have You Seen Our Training? 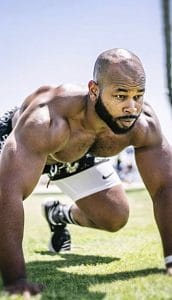 Running Back Drills To Become An All-Purpose RB